You may never know what results come of your action, but if you do nothing there will be no result.

To compensate and rectify the view we might create depicting all Libyans as ethnic cleansers or torturers we have created the Libyan Heroes for Tawergha page as there are a lot of remarkable and kind hearted people from Libya out there.

Please send your Libyan Heroes for Tawergha information to: heroes@tawergha.org so we can add them to the page. We know that most of them help from their heart and don't want the attention but we think it is a nice thing to put some sunlight on them and it shows the world there are a lot of Libyans out there not agreeing with and supporting the villains & warcriminals.

Sami was a bright Libyan activist and was very actively involved in supporting the Tawergha IDP's in Benghazi.

He was always positive & had high hopes for libya and wanted nothing but peace and democracy.

On Friday 2014-09-19 Sami was assasinated together with his close friend Tawfik Bensaud.

This guy was just incredibly sweet and was the last person on earth to deserve to die like this.

What kind of people would kill a 17 year old true Libyan Hero like him?

We hope you rest in peace Sami.

In February 1983, Hamroush graduated with a medical degree (MB BS) from Garyounis University and in December 1999 became a Fellow of the Royal College of Surgeons of Edinburgh.

On the 26th of February 2011, she and her son, Abdullah Elneihum, founded the Irish Libyan Emergency Aid (ILEA), a humanitarian aid organisation to provide medical supplies to Libya during the revolution, which assisted in providing medical equipment and consumables during the revolution to almost all areas in Libya.

From November 2011 to November 2012, Dr Hamroush held the position of the Minister of Health in the Libyan Transitional Government. During her term, Dr Hamroush showed remarkable character and intolerance to corruption and, despite the difficult circumstances, she successfully formed foundations for national medical services for her successors.

Dr. Hamroush is also the Head of the Preparatory Committee for the Libyan National Dialogue; an initiative aims to start an inclusive conversation about reconciliation in Libya.

She gave a very impressive speech about the internally displaced people of Tawergha at the UN Refugee week conference at the House of Commons, pointing out fair and clear where we have failed them and what should be done to make the February 17 Revolution succesful.

Gargoum is a fourth-year physiology and pharmacology student at the University of Saskatchewan. He flew to Libya on Dec. 23, hoping to start volunteering immediately but had to create his own program with the help of Volunteer Libya.

His Gift of Learning program, focuses on giving refugee children aged six to 10 an education unavailable in many of the refugee camps in Benghazi.

“It’s hard, because there’s just such opposition from both sides of the spectrum,” Gargoum said. “For example, my cousin, he told me not to volunteer and start this program, because he fought in Misrata and some of his friends and family died. It’s a heartbreaking deal having your best friend go up to you and tell you, ‘Don’t do this, don’t do this.’”

Gift of Learning will see its first class — with approximately 40 children — graduate over the Feb. 15 weekend. Gargoum attributes the success of Gift of Learning to the community being able to set aside tribal affiliations. He said he hopes to see the program expand to accommodate all the children of the Tawergha camp. 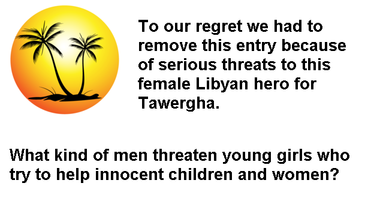 Sam Alsharksy, living in Chelsea, England is a Libyan from Misrata who joined the Feb17 revolution when is country was in need of heroes fighting for democracy.

After a second fight against a ruthless enemy within, he beat cancer. It changed the way he looked at life and decided to stop hating the people from Tawergha.

Libyan kids in camps was not what his fight was for and although many people in Misrata didn't agree with his effort, he started the 'housing project for Tawergha' providing healthy clean homes for the Tawergha families in Tripoli until the problem solved.

He persuaded many Misrati businessmen to join his quest for a fair treatment of the innocent kids from Tawergha and they have already helped many families.

Rihab Elhaj began work on human development programs in Libya after her nomination by the United Nations as the U.N. Youth Delegate to Libya for the Millennium Development Goals, carrying out a 4 year volunteer appointment for advocacy of the MDG’s in Libya.

On 2011-02-19, Rihab co-founded The New Libya Foundation to begin the work of building the nation Libyans have aspired to for four decades.

Their mission is to nurture the successful development of civil society organizations in Libya through training, education, access to resources and financial assistance with immediate focus on civic engagement, inclusiveness, and association.

She has invited the You(th) for Tawergha organization to the networking sessions at the Civil Society Incubator Center where discussions are held on a broad range of topics & events.

Click the 'Send' button for the 'Let them go home' campaign

Add your voice to the Avaaz online campaign

Help them by donating a small amount

We have posted the current results for the running campaigns below.

Last week we added more then 50 New Friends For Tawergha to the Special Thank You Page!

The e-mail messages, scripts and mailing lists are ready to go so give it a try and  let us know if we should change anything at all.

The Avaaz For Tawergha Campaign is up and running. It's quick, easy and sends a crystal clear message.

Spare them your old laptop and we'll collect it, flush the drives and enroll them with a new OS and educational software for the Tawergha Youth Development Program.

We have created a Special Thank You Page for all those people and organizations who provided this foundation the means and resources to help the Youth from Tawergha. 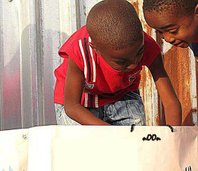 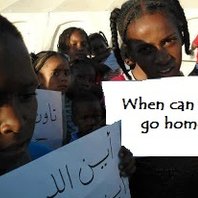 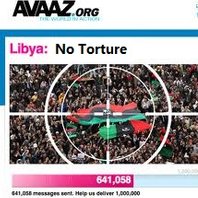 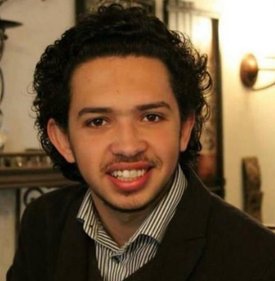 Tawfik was a Libyan activist and blogger and was very actively involved in supporting the Tawergha IDP's in Benghazi. On 2014-09-19 Tawfik was assasinated together with his friend Sami Elkawafi.

Only a few days before his execution, the Huffington Post published an interview with Tawfik conducted by Nada Elfeituri, where he expressed his commitment to the role of youth and civil society to steer Libya through this phase of instability,

“A military movement alone can’t solve the crisis; there must be a civil movement that works parallel to it. If youth are given a chance, they can find a peaceful solution. My message to Libya’s youth is, you are powerful and you can make change. You just need to take the opportunity and act.”